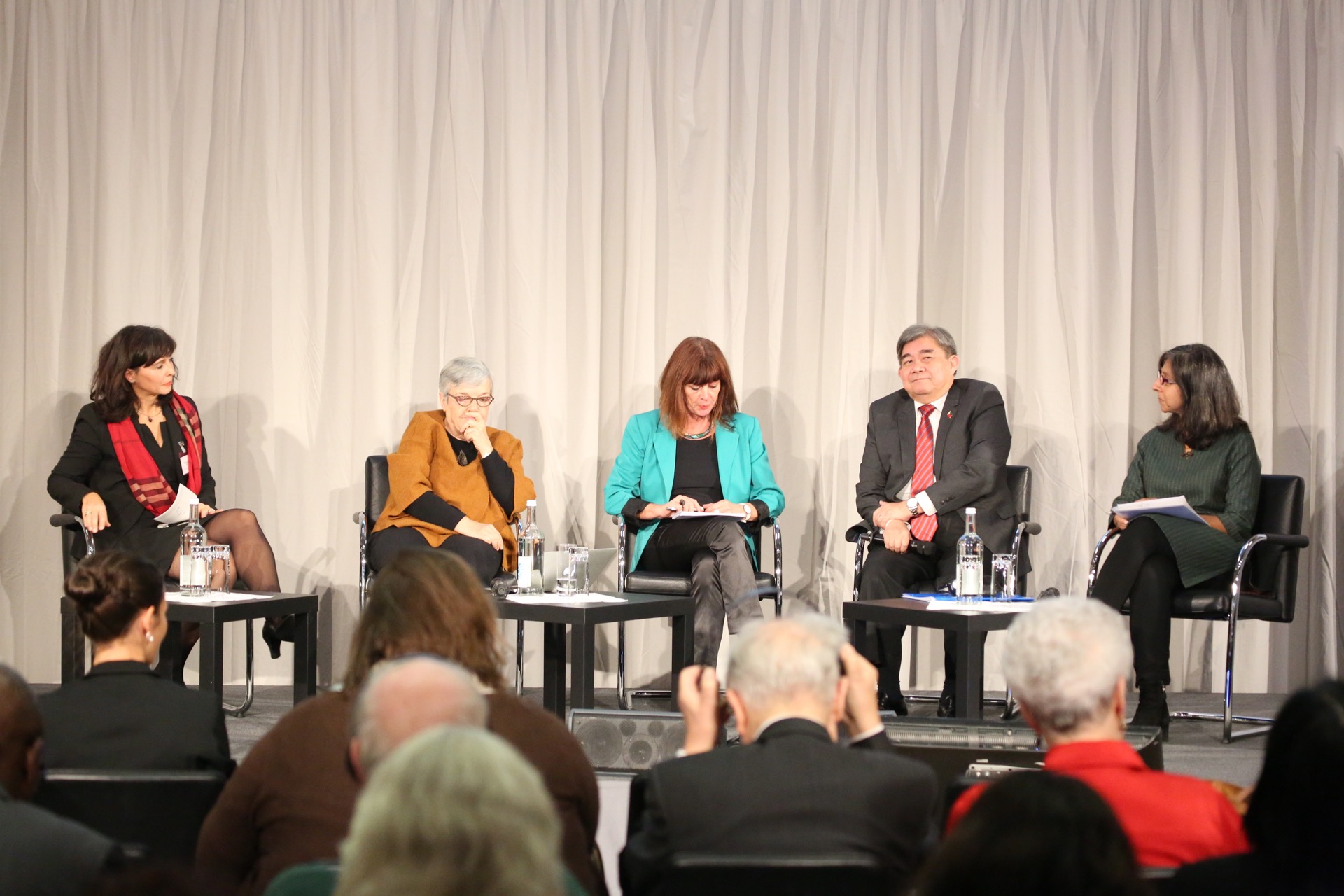 National voluntary reviews at the High Level Political Forum: First experiences with a focus on the health and gender goals

On the first evening, conference delegates and interested members of the public were invited to an open talk about first experiences with reporting to the High Level Political Forum (HLPF), the main mechanism to review the implementation of the Sustainable Development Goals (SDGs). The event was hosted by the Federal Ministry for Economic Cooperation and Development (BMZ).

In his opening comments, Parliamentary State Secretary, Thomas Silberhorn, said that Germany worked hard to enshrine SRHR within the SDGs. He described the 2030 Agenda for Sustainable Development as “a pact on the world’s future to ensure everybody can live a life in dignity”.

“Poverty has a female face,” Silberhorn told the audience. “One lever for progress is gender equality – a key human right! That is why we, in our development cooperation […] explicitly empower and support girls and women in order to improve their economic and social role.” This set the stage for a vibrant discussion of first experiences with reviews at the HLPF, specifically with regard to the health and gender goals.

As part of this, government representatives from Germany and Philippines shared success stories and described challenges they faced while carrying out national voluntary reviews on the status of implementation of the goals set out in the 2030 Agenda during this year’s HLPF. In addition, the panelists discussed how representative the results were of what is happening on the ground, the practical challenges of capturing knowledge when the number of presenting countries increases and opportunities for meaningful stakeholder participation, particularly civil society.

The panel included Carmen Barroso, who is the Co-chair of the Independent Accountability Panel (IAP) for the Global Strategy on Women’s Children’s and Adolescent’s Health. She was joined by Anita Nayar, the Director of Regions Refocus, Juan Antonio Perez III, the Executive Director of the Philippines Commission on Population and Harriet Ludwig from BMZ, Deputy Head of Division 2030 Agenda.

Juan Antonio Perez III shared some of his country’s experiences, as they were among the first, alongside Germany and 20 other governments, to report to the HLPF. One of the first things they realised was that they could only effectively report on half of the SDG indicators. “We knew that we had more work to do on the other indicators, let’s say gender-based violence,” he explained.

When asked what that work would look like, Perez explained that one of the lessons learned from reviewing the Philippines’ work on the Millennium Development Goals (MDGs)[1] was that they had not involved local government early enough and that civil society organisations were not effectively participating in planning. The country has now set up systems which aim to provide civil society a share of the planning space.

“We have local health boards where one fifth is from civil society. So we are trying to improve that participatory part, particularly at the local level,” he explained, and continued by emphasising the importance of a decentralised approach to involve stakeholders. “One of the things we are going to do is ask our community level political leaders – we have village leaders who know really the situation at that level. We’re strengthening that level of reporting for maternal mortality and other areas.”

Speaking from the German experience, Harriet Ludwig said it was a privilege to be one of the pioneer countries to present at the HLPF. She explained that most countries, including Germany, struggled to meet deadlines and to create short, comparable reports with so many countries reporting alongside each other. She and the other panelists agreed that with more than 30 countries presenting next year, logistics and knowledge capture presented major challenges.

Ludwig emphasised the value of political will and ambition, explaining that the commitment to present the report in 2016 was made by Germany’s Chancellor Angela Merkel – and that, in turn, facilitated the engagement of ministries and stakeholders.

“We have a longstanding (commitment to) communication and harmonisation in the ministries,” she told the audience. “Through all the negotiations, we already had this entire government approach and a regular exchange with civil society, with the private sector, with municipalities and non-state actors.” She added that writing the report and completing consultations had been a major challenge due to time constraints, but that the engagement of different actors, including from civil society, greatly improved the final draft.

Anita Nayar, the Director of Regions Refocus, critiqued the process, calling it a “work in progress” which placed strong emphasis on the HLPF in New York, “when what is really needed is a decentralisation of the conversation to the regional and national levels”.

“We need to have much more rigorous reporting. There needs to be a better framework of what it is countries are reporting against,” she explained. “Otherwise it can just be what many of us call a beauty contest, where people just present the best cases of what is happening at the country level and shove it into an SDG framework.”

She said that while many governments encourage civil society to participate and feel ownership of the 2030 Agenda, far more consultation was needed to enable civil society to make a substantive contribution. “It’s really not about ownership in and of itself. It’s about policy autonomy and policy integrity,“ she said. “Governments need autonomous space to develop national development plans that are based on these goals and based on frameworks that are progressive within their regions.”

Nayar added that many countries are forced to negotiate their plans according to donor priorities, and that accountability to citizens was not as strong a priority as it ought to be. “We are seeing, in the global south, more resources going to international NGOs and less into autonomous civil society movements, so the very people this agenda is meant not to leave behind are not resourced to speak on their own behalf.”

Perez was invited to speak to this issue. He said there was guidance to be found in failures during the MDGs, when local consultation happened too late, if at all. “SDGs force countries to decentralise, to de-concentrate to the local level. That is where the action will be,” he said.

Anchoring the work in human rights

Drawing the conversation full circle, Carmen Barroso of the IAP pointed out that accountability was receiving more attention than it had during the MDGs. She acknowledged that there continued to be resistance in this area, because not all governments welcome accountability. She applauded the improvement of data capturing, but warned that “data is only enough for monitoring, and accountability is much more than monitoring”.

“Accountability is monitoring, review, and action and remedy,” she said, “There then needs to be political will to use the data to change the conditions that led to the violation of human rights.”

She closed with a reminder that the work to achieve the MDG Agenda remains far from over. “There was a decrease in maternal mortality, but it is still very, very high. Unacceptably high and still very unequal,” Barosso said, adding that progress was not evenly seen in all countries.

“The Independent Accountability Panel focuses on inequalities because the great success of MDGs was on averages, not on reaching everybody,” she explained. “Now SDGs say ‘leave no one behind’. That means (also) the poorest, the adolescents. The inequalities between adult women and young women are immense. That’s what we are now facing.”

The evening ended with a closing speech from Lucien Kouakou, the Africa Regional Director of the International Planned Parenthood Federation (IPPF). He thanked each of the panelists, and extended his gratitude to Germany for its „strong commitment to SRHR and support for organisations like IPPF“. He encouraged the audience to continue seeking ways to effectively implement the SDGs at the national level with the full inclusion of civil society and grassroots groups. He closed by turning the audience again to the plight of the ten year old girl, as framed by UNFPA. „Let’s follow this generation of girls and see if by 2030 we have been able to address her hope,“ he said. „That is what I call accountability.“