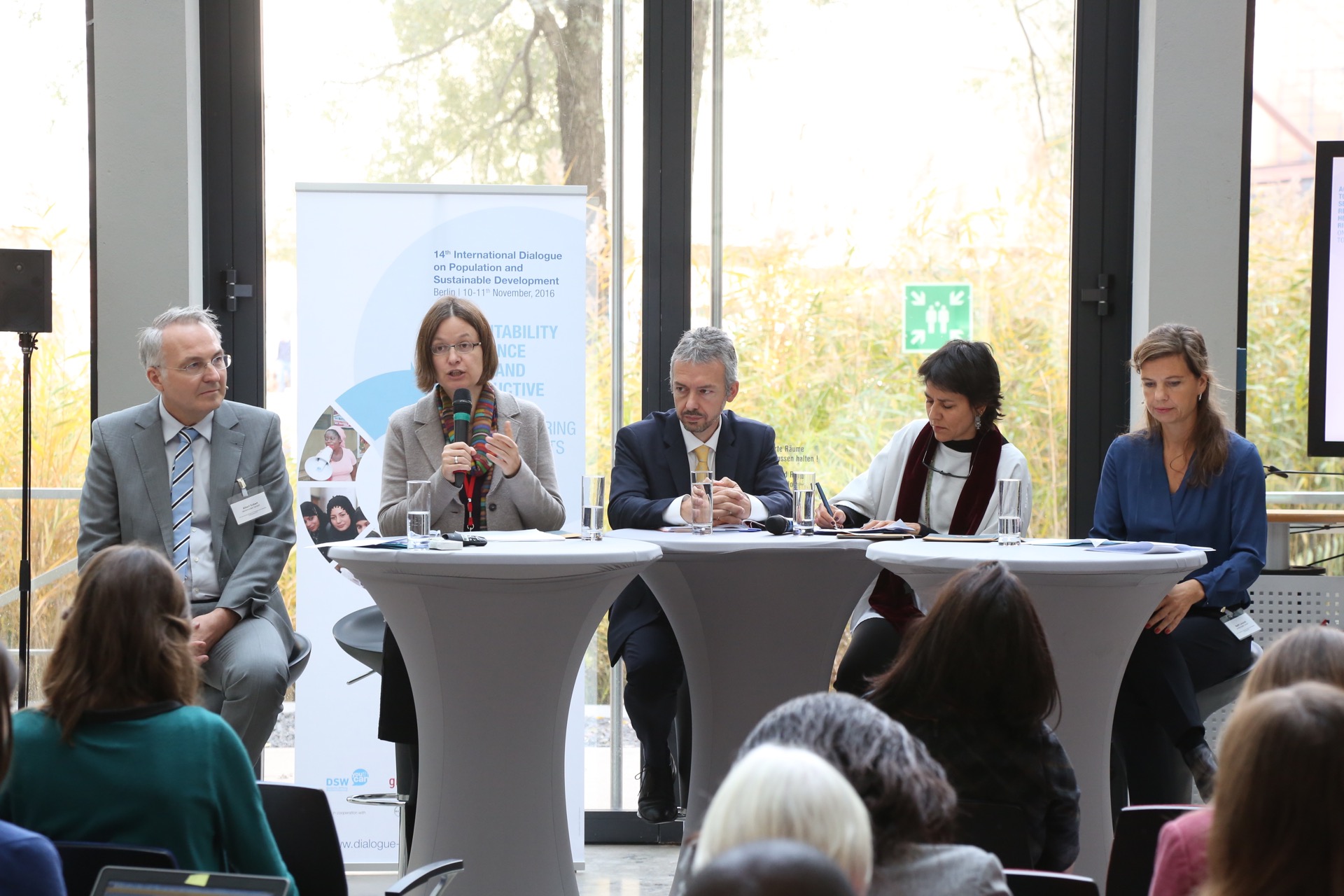 Following the opening session and keynote speech from Laura Londén, three experts in accountability issues were asked to help set the pace for the two-day conversation, by presenting some of their knowledge and answering questions from the delegates. The expert panel included Marianne Beisheim from the German Institute for International and Security Affairs (Stiftung Wissenschaft und Politik, SWP), Emanuele Capobianco from the Partnership for Maternal Newborn and Child Health (PMNCH), and Ana Cristina González Vélez from Global Doctors For Choice.

Marianne Beisheim from the German Institute for International and Security Affairs (SWP) began to anchor the discussion by defining the difference between accountability, monitoring, follow-up and review. She explained that monitoring is about data and assessing the data, mostly for verification purposes. Follow-up and review, in contrast, is about interpreting and analysing this data, which means looking at causal relationships and asking if the measures at hand lead to the achievement of goals, targets and indicators. This also includes identifying successes and failures, sharing best practices, discussing challenges and identifying areas where capacity building is required. “This is to inform the change management that we might need if the measures are not really helpful to be on track for the targets and the mandate of the High Level Political Forum,” she explained. “In a way, the follow-up and review mechanism that has been established is supposed to create the evidence base for this political guidance.”

She then explained that the 2030 Agenda does indeed talk about accountability, even though it uses weaker language of ‘review and follow-up’, but acknowledged that this was a tough battle. “There were some member states that didn’t really like the concept… and it was difficult because at global level, countries didn’t like the idea of a peer-to-peer review, and intra-state accountability, because many countries were fearing that this could be the basis for conditionalities. They perceived this as too prescriptive, too intrusive and that’s why we only have wording on accountability in the agenda at the national level.”

Beisheim reminded the delegates that the SDG report, like the MDG report in former times will look at aggregated data only, looking at all countries. In an attempt to capture what progress individual countries are really making, an idea emerged for an additional tool. “That’s why the Agenda 2030 and its follow-up and review framework encompass other elements in this voluntary mechanism.” She finished by stating that even though voluntary national reviews are not mandatory, they nevertheless offer a window into the national situation, which was new and valuable.

Emanuele Capobianco from PMNCH was the next expert to address the delegates. He started out by describing the function of the PMNCH accountability working group, with special focus on the Unified Accountability Framework (UAF) of the Global Strategy for Women's, Children's and Adolescent's Health. PMNCH, he explained, brings together 800 organisations from 10 different constituencies, and involves civil society, the private sector, government, youth and adolescents, academic researchers and training institutions. The focus of this partnership is to harmonise the response of the 800 partner organisations around a common agenda.

“One major problem we have now globally, is that we have too many instruments, too many systems and there is a need to simplify and harmonise,” Capobianco said. “Earlier reports have identified major weaknesses,” he said, pointing out that most countries will not be able to provide data on all performance indicators. “There is a big call to invest in data systems at country level to reduce burden and move towards the right monitoring system.”

Capobianco then moved onto citizen led accountability, which PMNCH strongly encourages. He said that the partners have been very supportive of NGOs conducting Citizen’s Hearings to ensure that the voice of service users remained constantly at the core of their work and rooted them in a rights agenda.

“In terms of products the partnership will deliver a synthesis report of the Global Strategy next year, that will go to the World Health Assembly,” he said, adding that PMNCH intends to create a one-stop website where data and visual maps will offer a coherent picture of available data and its usability in the area of sexual and reproductive health.

A regional perspective from Latin America and the Caribbean

Ana Cristina González Vélez from Global Doctors For Choice was the last expert to address the audience. She reflected on regional experiences with a focus on the Montevideo Consensus, including its implementation and monitoring. The consensus was approved in 2013 as one of the regional review conferences 20 years after the ICPD, by governments of Latin America and the Caribbean region. She reviewed the monitoring process of the Montevideo Consensus and reiterated earlier points about the central role played by civil society groups in advocating for SRHR-related goals, but also on the SDG on inequalities, a major concern specific to the region.

In the question and answer period, there was a vibrant exchange of ideas. Delegates used the space to ask questions, but also to tell their peers about working groups and tools, as well as mechanisms, which had not yet been mentioned. Many issues were raised, but two in particular seemed to gain traction with delegates. One was about how to simplify and harmonise as ever more mechanisms and review processes emerge. The other was about how to align when regional indicators are more progressive than those outlined in the SDGs.

Capobianco agreed that simplification at the national level and harmonisation were absolutely crucial. He also supported dialogue with many stakeholder groups. “Critically, at country level, we must have platforms that are inclusive because if you only have government, UN agencies and donors around the table, you are missing critical partners: civil society, youth and adolescents, and the private sector.”

Catarina Carvalho from IPPF in Geneva brought up the issue of funding now that a major country has new leadership which is opposed to many of the rights upheld by the SRHR community. She also asked Vélez to expand on what her region is doing to achieve SDG 10. Vélez explained that in Latin America, the inequalities addressed through SDG 10 were of crucial importance. “We are not here fighting only for SRHR, we are fighting for political autonomy and economical autonomy.”

She closed by telling her peers that any forces which appeared to be working against their shared values could be overcome. “We have seen in these last months, not just bad things, but also good things,” she said. “We have seen many women and men, many young people in the streets from Poland to Argentina, Mexico to Colombia. We are millions and when we get organised, we are very persistent. Upgrades to the patriarchal system are no longer supported. The time for women is coming… expect us.”